Adoption of digital assets in the TradFi Short Term Debt Market
Getting access usually takes 5 minutes to complete.
Please note you will need a few business documents on hand to complete the KYB process.
Start Now Request a Demo instead 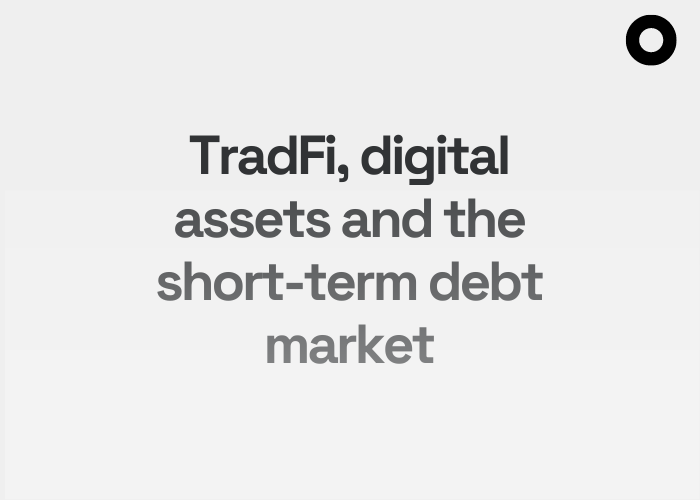 In this article, we talk about the conditions needed for the adoption of digital assets in the TradFi short-term debt market while drawing upon some historical insights and current market developments.

The advent of “New Money” (and other digital assets)

As of February 2022, the daily trading volume activity for Crypto was $93.4 billion. In spite of volatile market conditions, the global crypto market cap surpassed 1 trillion. 5 years ago, at the start of 2017, the total Market Cap for Cryptocurrencies was $17 Billion. According to Boston Consulting Group, crypto will amass up to 1 billion users by 2030, with the total market cap quintupling up to $5 Trillion.

While in terms of daily volume, fiat currencies remain the main choice for financial transactions in the short-term debt market, we are currently entering a new era where digital assets can no longer be ignored by both commercial and institutional banks.

So, in the face of the impressive volume of cryptocurrency trading, and its ever-growing participation, why aren’t traditional financial institutions embracing this new phenomenon at scale? What are the main reasons for TradFi’s reluctance?

Emergence of Crypto & other digital assets

Created on the heels of the economic recession, Bitcoin was officially released for public usage on January 3rd, 2009. Created to be an electronic peer-to-peer cash system, it also acts as a store of value for investors, being compared to commodities such as gold. Today, there are over 20,000 cryptocurrencies in circulation. Traditional finance still struggling to come to terms with it.

TradFi’s Reluctancy in the adoption of digital assets

Cryptocurrencies have so far acted as more of a speculation tool rather than a currency. Having no stable infrastructure at its basis, lenders and borrowers of crypto are subject to an immature market. By definition, cryptocurrencies have no central authority regulating it, and instead run on a blockchain. This is both a blessing and a curse. Price volatilities are the norm here. Blockchain developers have tried to combat this by creating “stablecoins”, Crypto assets which are tied to the worth of an external currency, such as the US Dollar. In spite of this supposedly safe alternative, Terra Luna, which used to be the most prominent stable coin on the market, fell victim to the blockchain crash earlier this year. Becoming the subject of a bank run, the stablecoin crashed in May 2022.

An easy solution is to simply not deal with the problem. China, Algeria, Bangladesh, Bolivia, Colombia, Egypt and other countries have restricted cryptocurrency usage or made it completely illegal.

One alternative: the DeFi way

The alternative solution is to actually build the infrastructure from scratch. However, whenever a commercial or institutional bank wants to engage in digital asset exchange, a huge amount of due diligence is required. Know-your-customer (KYC) requirements are now being met with “know your customer’s customer” requirements.

The transaction itself is a lengthy process. Counterparties tend to maintain communication through Telegram, and manually transcribe the transaction into Excel spreadsheets. Labor intensive middle offices with high operational inefficiencies are commonplace.

Blockchain developers have tried to combat this problem by embracing all of DeFi’s advantages with decentralized exchanges. A decentralized exchange is a peer-to-peer marketplace where users can trade digital assets without an intermediary to facilitate the transactions. Nevertheless, they are vulnerable to the very technology it relies upon. “Anchor Protocol”, “Internet Computer (ICP)”, “Filecoin (FIL)”, “EOS”, “dYdX (DYDX)”, and “LooksRare (LOOKS)” are examples of decentralized exchanges whose native token have fallen over 90%.

DeFi so far hasn’t been able to come up with a solution, which is appropriate for traditional institutional conduct.

The finance industry needs to innovate a platform which integrates all the advantages of both traditional finance and decentralized finance.

Bridging the gap between the established and the new world

As of now, cryptocurrencies are proving to be a challenge for the traditional finance sphere. Lack of transparency, unknown counterparty risks, and barriers for communication, are few of the many hurdles faced by lenders and borrowers.  All of these factors combined contributed to a lack of a wide adoption of digital assets in the TradFi short-term debt market.

Currently, the institutional short-term debt market for stablecoins and crypto assets is heavily underserved due to a lack of large-scale lending and borrowing infrastructure that reduces counterparty and DeFi protocol risks. – Michael Guzik, CEO at CLST

Institutions are looking to engage in short-term debt markets for the “New Money“, where cryptocurrencies and stablecoins can be used for collateralized and uncollateralized lending. This is where CLST comes in – we are bringing established, robust institutional practices and mechanisms into the digital asset era.

We created CLST to automate bilateral price negotiation and settlement for institutional lenders and borrowers with the aim to break silos in the New Money Market.

To request early access to CLST Markets, reach out to our team https://clst.com/. 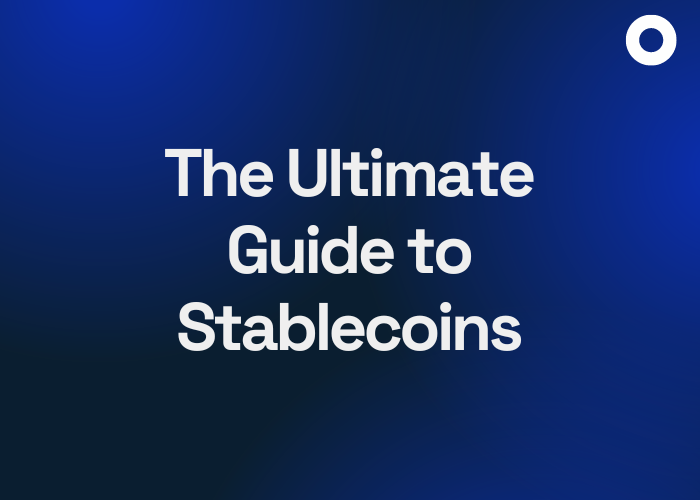 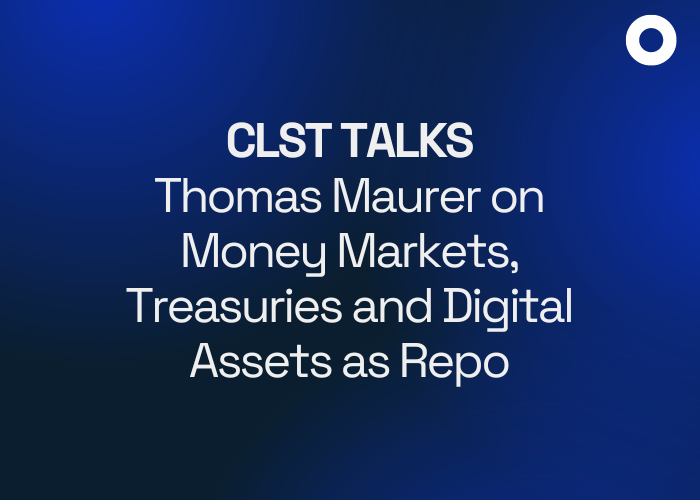